Cycling is something I’ve always enjoyed. My earliest cycling memory dates from when I was about 9 and learned to ride on an adult’s bike so big I couldn’t reach the pedals from the saddle. We were living in Barbados, and our friends with the bike lived on the road surrounding the Savannah, a huge park containing the racecourse and a cricket ground. Early on, I took the bike out on that road – heaven knows what I was thinking! – and vividly remember a car passing so close that I instinctively leaned away and wobbled into the deep ditch. Relatively unscathed, I was nonetheless mortified and terrified of being found out. I don’t think I ever told my parents. On another occasion, in my teens, when we had moved to Trinidad, I was bitten by a dog that ran out from a nearby garden as I rode past. It was a serious bite on the ankle, and took weeks to heal, but despite all that, looking back on those times still gives me a thrill.

After that, I nagged constantly for a bike and eventually my parents agreed. My mother, while on a visit to England, took me to Hereford to choose one when I was at prep school in St Asaph. I kept that bike right through secondary school and beyond, and only parted with it when it became too rusty to ride. In 1974, as I was heading off to Strathclyde University, I spotted an old road-bike with drop handle-bars in a friend’s barn, and bought it for a song. It served me well, that trusty steed, until, despite being locked, it was stolen one Sunday evening in 1977 from outside Charlotte Chapel in Edinburgh.

I didn’t get another bike until 1998, when my MG Midget died and I decided to get fit again, to try and keep up with my growing sons. I bought a mountain bike with the intention of cycling to work by Christmas, and on Christmas Eve I even managed it. Better late than never! Alas, it didn’t become a daily habit, but over the next twelve years my time for the 6 mile journey did improve dramatically. Mercifully, the homeward 6 miles was downhill – my preferred direction!

Since 2002, Jan and I have been doing various long-distance Scottish walks, including the Canals, the West Highland Way, and the Speyside Way, mainly in short stretches, and often taking the bikes. When Jan, who is a keen hill-walker, began climbing Munros further afield, I started hitching a ride with her to explore more of Scotland at lower levels, occasionally painting a water-colour en route. But I found the mountain bike hard work and only managed to cover any significant distance a few times – about 30 miles each way from Dalwhinnie to Aviemore was the most in a day!

On retirement in 2010, I decided to get a ‘proper’ bike and when Pegasus arrived I was enthralled. What a beast! My old cycling fervour was rekindled, but alas, the contrast with the mountain bike was too great: narrow wheels, higher pressures tyres, and a lighter frame altered all the dynamics. On a 35km ride from Dalwhinnie to Blair Atholl, I came a cropper as I jack-knifed out of a pot-hole on the old A9, leaving more of my left knee, my right hand and my pride on the track than I care to remember. Fortunately, Pegasus escaped with minor scratches. But just a month later, I was travelling too close to a car outside the National Museum on Chambers Street in Edinburgh and was in the gutter again. More scars! Again Pegasus was largely unscathed, but I put him away for the winter, got road-tyres on my mountain bike, and set out to get myself back up to speed.

By the following spring, I felt confident enough to take Pegasus out again, and started training with my friend John for the annual 50-mile Pedal for Scotland, Glasgow to Edinburgh cycle ride. After completing that successfully with approximately 10,000 others, I began something I hadn’t achieved all those years ago – routinely biking to work at my new post at Edinburgh Napier University. Who says old dogs can’t learn new tricks?

Then, just before Christmas, Jan spotted an ad for the Big Issue cycle ride from London to Paris.
‘What about that?’ she said.
‘You’re just hoping to claim on my insurance,’ I replied.

But the more I thought about it, the more the idea appealed. I wanted to follow-up Glasgow to Edinburgh with a bigger challenge before my 60th birthday. The extra fitness would be helpful too. More importantly, the ride is for a cause that I truly believe in. So I took the plunge and signed up.

So, in mid July I’ll be participating with who knows how many other cyclists on the 230 mile, 3 day trip from London to Paris, each of us having raised a minimum of £1,400 for the cause. The Big Issue Foundation gives ‘a hand up, not a hand out’ to many homeless people in Great Britain and Ireland. If you haven’t heard of The Big Issue, it’s a magazine sold on the street by homeless people who are entitled to keep the 50% profit they make from sales. The experience of ‘working’ and the self-esteem it brings is worth as much to them as the cash which helps to pay for hostel accommodation, food, and other living costs.

I’ve been in training since February, and recording my experiences on a blog. So far it’s been incredibly rewarding and the main event is still to come! Please join me on Pegasus Pedals! and keep up to date with my progress, and if you feel like donating towards the minimum £1400 I have committed to raise, I would be most grateful. Please click here. 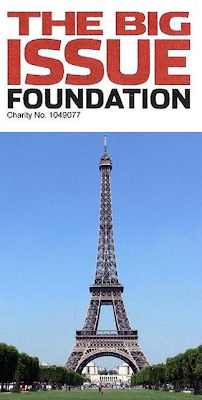 Thanks for reading!
Hope to see you again.

Posted by Lorely Forrester at 14:53