I hardly needed my alarm clock to wake me at cock-crow this morning.
A savage wind had already woken me several times as dawn crept in.
Here we are at the solstice, the longest day of the year, and Irish bonfire night - all crammed into one summer weekend - and you would think it was mid autumn.
I think it's my fault. A few days ago I wrote that it was hot and dry and wonderful. Needless to say, it started to rain the next day.

As I hauled myself reluctantly out of bed, I wondered whether the lads from the marquee company would even try to put the tent up on the beach. How would they ever fasten it down?
I had visions of a kind of marquee-shaped hot air balloon gusting across Donegal Bay with various people dangling from ropes. I tried to quell such negative (but graphic) thoughts, grabbed the flapjacks, my winter coat, hat and wellies, and headed out the door.
Marie Christine - one of our wwoofers -  was waiting by the car, despite the appalling hour and weather.

We were off to help at the 4th annual skinny dip to raise money for cancer research.

After last year's Dip in the Nip, I no longer had romantic visions of driving into the dawn, which was just as well, as nothing was visible on the horizon except low grey cloud hanging like soggy fleece, obliterating everything.
But to my amazement, when we got to the beach, a half-erected marquee met our eyes, with - yikes - men clinging to ropes...


I was instantly and efficiently directed to a parking slot and from that moment, everything fell into place with oiled ease. Before the tent was even fully up, it was filled with tables, portable gas rings, boilers, catering flasks full of piping hot coffee and tea, not to mention endless tins of flapjacks and buttered scones.


In a separate corner we laid out Talentui organic soaps and oils, cards and crafts - including lovely little pottery dishes with Dip in the Nip 2013 hand printed on the bottom. Our resident potter had made them with clay from the next bay along the coast, each one different. 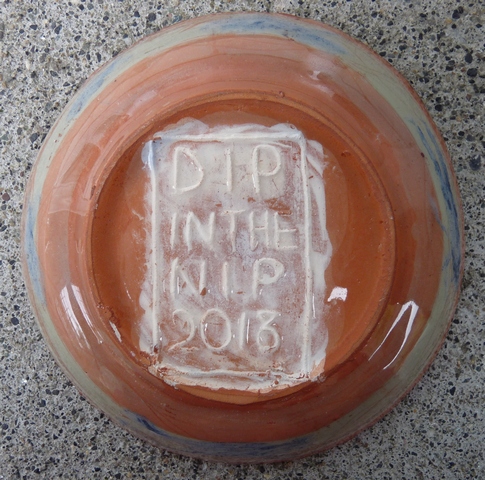 Dip in the Nip's inventor and organiser then informed us that everyone had recommended cancellation. The Irish Coast Guards, The Irish Surf Association and Life Guards, even I think the County Council, not to mention all those sane enough to be still in their beds, snug and warm.
Glancing out at the wild, messy ocean, and listening to the wind battering the tent, it wasn't hard to apply the logic.
But the suggestion that people ought not to fulfil the morning's purpose was met with loud boo-ing, and within minutes the men and couples had headed off to their stations at the far end of the beach, and a stream of pink wigs and dressing gowns was flowing down after them, if not eagerly, at least with determination. Marie and I took a few minutes off our tea-lady duties to watch as they gathered for a photo, away down the strand, before flinging their dressing-gowns off and racing towards the sea. 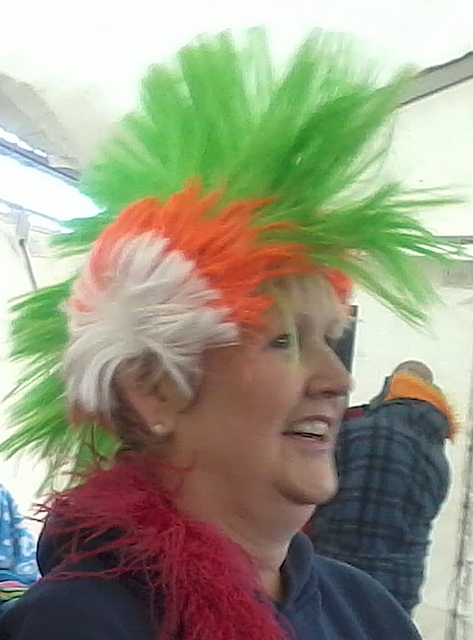 High up where we stood beside the tents, we watched items of clothing dancing along the sand like Disney characters. A pink wig somersaulted towards us like tumbleweed, followed a moment later by a t-shirt, flapping through the air like a strange, pink bird. 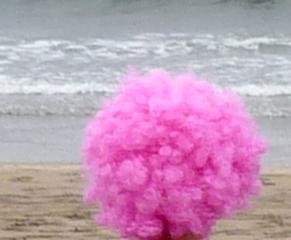 We never saw them again, but it wasn't long before the Dippers started to reappear, eager to wrap their numb fingers around a hot drink.
'It's warmer in the sea than on the beach,' they said.
I could believe them.

But it was warm in the tent too. Not because the temperature was higher, but because everyone was there for the same reason, and everyone was in it together, dippers and helpers alike - trying to raise money that might save a life, or to commemorate a loved one, to support someone suffering from a horrible disease, to forge new hope.
The air was filled with friendship and laughter. Despite the innate sadness of the cause, it buzzed with life and love.


There were no wishing trees this year, the wind was too strong.
But as Marie and I left, I saw that the car park was full of pink feathers, torn from boas and now settling into the sand and gravel like confetti.
Each one a silent prayer.

I am sad to see that sections of this post have been randomly used in an article about Dip in the Nip in the online publication, Sligo Today - without prior permission or acknowledgement as to the source.


The post I wrote after this same event last year, Nippy Dipping in the Briney, has been the second most popular post on my blog, ever.
You can read it here if you would like to.

Posted by Lorely Forrester at 15:38