I've been dodging the rain recently - if at all possible.
I was back in Suffolk, visiting my folks, where it is notoriously dry compared with the rest of the British Isles. While I was there, the In-Charge was nearly washed - and blown - away here on the west coast. I ended up staying on in the UK for an extra few days, not as a deluge-avoidance tactic, but because my Dad wasn't in great form, but it was a sensible decision all round, as it seems doubtful that my plane would have landed - mid Desmond - at our exposed local airport, had I returned on time.
When I did get back, I just about had time to swap the contents of my suitcase over before we headed off to Belfast for a long-booked, three-day break - a wonderful present from a friend.
Gorgeous #2 Son came home to mind the shop, as it were, in our absence, bless him.


Bliss.
I would quite happily live in a hotel, if the Model Dogs could come too.
What, as they say, is not to love? Especially at this time of year.
The Christmas trees were up, the bed was gloriously comfortable, hot water power-hosed out of the taps whenever I wanted a bath, the room was cleaned and the bed made while I was out doing happier things, and we had only to lift a telephone to receive sustenance, night or day. There was also a fridge to chill my prosecco, and breakfast, each morning, catered for every whim I might have had, the restaurant offered dinner if you couldn't be bothered going out, the bar drinks. 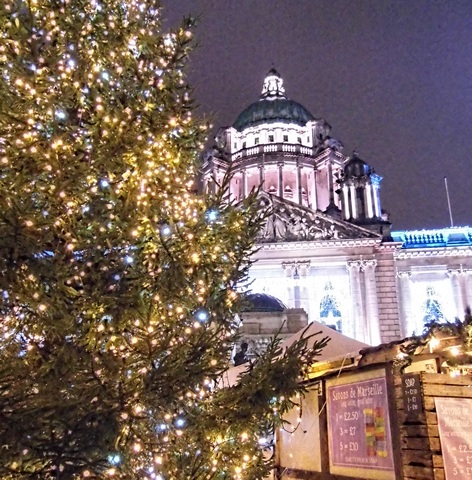 We were both tired, and decided to just have a relaxing couple of days pottering around.
At least, that was the plan. But no sooner had we dumped our stuff in the hotel, than out we went for a scrummy - but restrained - lunch at a delectable city cafe up the road, immediately blew that by having large helpings of pudding; staggered off to see The Lady in the Van (wonderful); got caught in the rain, missed the bus (my fault), hailed a cab; steamed in the bath to ward off rain-induced chills; and then settled down to a long, lazy dinner over a bottle of nice red in the hotel restaurant.
(If the Models had been under the table to discretely receive the bits I couldn't manage, all would have been perfect.)


Over breakfast the next morning, which neither of us did justice to (too much dinner), we planned our day. It was miraculously dry, but breezy and cold outside.
At home we'd have been eating porridge, but as we'd both peered separately into the steaming silver vat on the buffet table and decided that we only fancied porridge if we'd cooked it ourselves, we opted for other fare. Porridge, let's face it, is not felicitous to behold.


The In-Charge then went off to catch up with his mate Colin, and see his studio. I went - surprise, surprise - to the Christmas Market clustered around the City Hall, five minutes walk from the hotel. 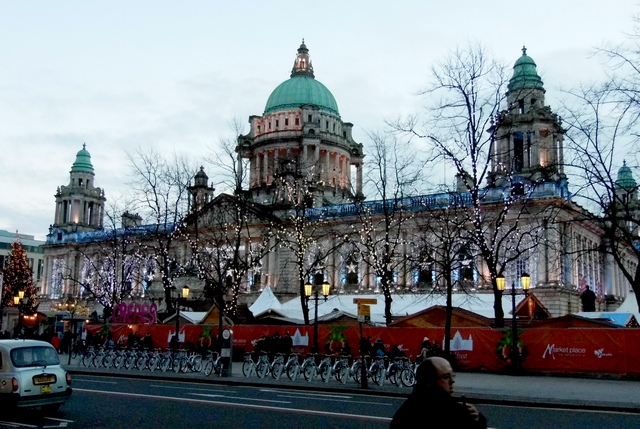 By the end of our three days, we'd done at least a week's worth of walking, visited most of the shopping  areas in the city centre, wandered around St George's Market, seen the Christmas Market at night, bedecked with fairy lights, eaten and drunk our fill several times over, been to IKEA and an English supermarket, shoved all our festive UK-bound mail into a British post box and seen three movies. We'd also popped in to St Malachy's, the lovely old church the In-Charge helped our friend DodoWoman to restore a few years ago, and visited Colin Davidson's amazing 'Silent Testimony' at the Ulster Museum. It is a superb exhibition - portraits of people bereaved or injured during the Troubles.


The In-Charge went for a drink with Colin in his local. It had one of my favourite WB Yeats poems on the wall, put together out of old printer's blocks. He took a photo of it for me. I think it's rather wonderful, but I wonder how quickly, after it was made and polished and put up on the wall, its creator spotted the spelling error? 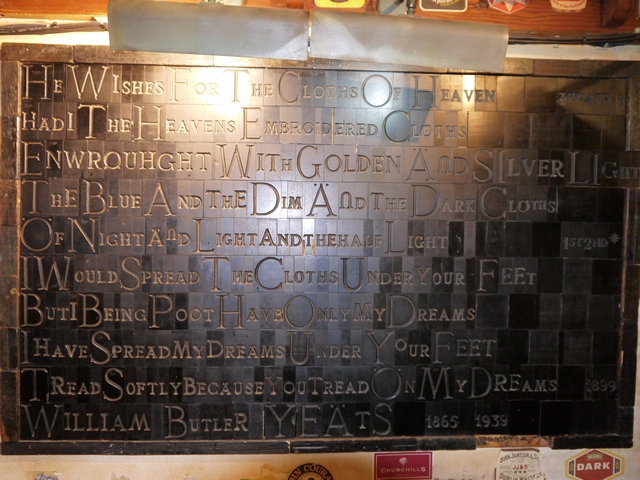 It was a lovely few days in a beautiful city.
We were almost too tired to drive home, but fortunately the In-Charge is deeply reliable at times like that.
I just about caught a snap of 'Rise', the vast football-shaped sculpture on the way out of town, before I fell asleep and left him to get us home.

The Ghost of Christmas Present

We're Country Hicks these days, the In-Charge and I.
It wasn't always thus - back in the day, we were happy-go-lucky Londoners, but these years there's a good bit of straw in the auld hair and heaven knows what on the boots.
But recently we threw some vaguely respectable duds in the back of the car and headed to Dublin for a couple of days.

Listening to some radio show en route, I instantly resolved to see Matthew Bourne's Sleeping Beauty at the Bord Gais Theatre. I feel very deprived with regard to Matthew Bourne, as I never did see his Swan Lake. It was, the radio said, the last few performances of the ballet, and - knowing the In-Charge would rather watch paint dry, I planned to sneak in a matinee while he visited a friend's studio.
We had several lengthy appointments to work around, but still...

A meeting on the way took a bit longer than anticipated, so we got to Dublin later than planned, too late for that day's ballet matinee, anyway.
After checking in to the hotel, we headed round the corner to Oliver Sears - an obligatory pit-stop every visit. The In-Charge knew that the gallery was showing a Donald Teskey exhibition, so definitely not to be missed. It was fabulous, and if it's still on, go and see it for yourselves.

We play a game in galleries - daft but inevitable.
We separately decide which painting we can't possibly leave without.
Teskey's prices being what they are, it was going to be a picture imprinted on the brain or the phone, but better than nothing.
It took me ages to choose.


And even so, I'm still not certain.
I loved the Carrowkeel series too, and would have been happy to have left with those under the other arm.
Teskey spent a period of the summer up in Sligo, so the paintings particularly resonated.

After that, there was nothing for it but to nip into the National Gallery for another fix.
They had a new exhibition of portraits by John Butler Yeats, father of the more famous William.
The In-Charge liked his self-portrait. It makes him look a jovial sort of chap, but I'm not sure that he was.

I preferred the portrait of his daughter Lily (Susan) but on balance I'd probably have chosen a Sargent or an Orpen.
Or a Lavery. I've always wanted Lavery's portrait of Hazel and Alice and Rodney Stone.

After that, of course, we had to go into the National Gallery shop where we fell in love with more dogs.
This time Charles Wellington Furze beguiled us with his fanciful Diana, but there were lots of others too.

We bought a book for a friend and moved out into the streets, slightly punch drunk. Looking at wonderful paintings seems to do that.
But being in Dublin's streets had another effect on us - they time-warped us forward. Although it was only mid November at the time, everything was wall-to-wall Christmas. I suppose that's normal, but not in our sleepy back-water and, to us at least, the 'Festive Season' still seemed a long way off.
The shop windows were spectacular, the pubs and restaurants were decorated to within an inch of their lives, and pre-Christmas sales were in full swing. 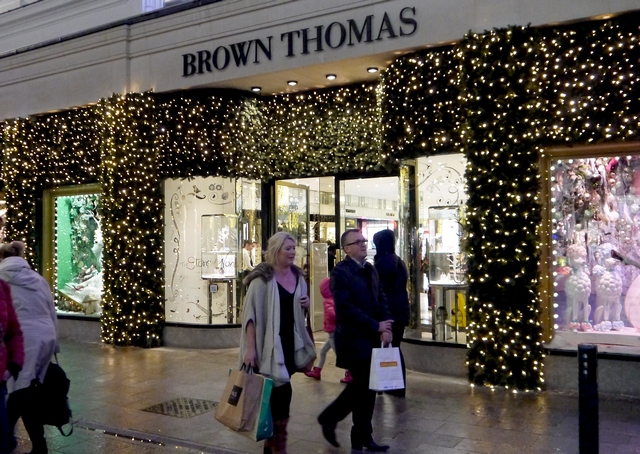 I didn't make it to the ballet. Sadly, our appointments on both days overshot the matinee performance.
We didn't even make it to Suffragette, a movie I'd really wanted to see, as we'd missed it at home. On arriving at the cinema which still advertised the film on its programme, the box office said: 'Not Tonight, Josephine', or words to that effect. It was late by then, so we gave up and went to James Bond.
A bit of a damp squib, but there you go.

Before we knew it, we were heading back to the sticks, and now, several weeks on, our brief Dublin trip is receding into a ghostly reminiscence, but we both feel we've done Christmas.Somewhere along the line, there was even a turkey, ham and cranberry sandwich.

Now I am in the UK, where, amidst the floods and winds, there are Christmas trees and sparkly lights.
It feels rather odd, somehow, because surely by now we ought to be launching into New Year?