Nippy Dipping in the Briney

My alarm went at 5am on Sunday morning.
A tad early for me, especially as I then discovered that the weather forecast had lied, and it was raining.
However, while I may not have leapt exactly, I got up, drank last night's glass of water (I could have just stood outside with my mouth open), loaded the car and set off, munching a flapjack in lieu of breakfast.

It was not the inspiring drive I had envisaged. I'd imagined driving into the dawn, the sea pearlescent in the early morning sun, the day new-minted, the air effervescent with anticipation.
Instead I couldn't even see the coast, the sky lowered and I had to play slalom on the soaking roads to avoid the baby rabbits.

When I arrived at the designated beach, it was to see an array of vehicles and a mini-army of faithfuls struggling to put up tents in the rain. The Beltra Country Market tent was already up, but various others were in sodden heaps on the ground.
Oh joy! 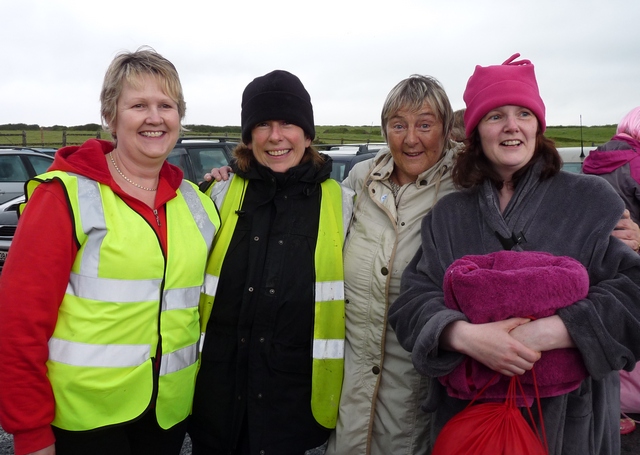 Today was the annual Dip in the Nip - the fourth of its kind - to raise money for cancer projects, research and charities around the country; and we were all delighted that the Market's local beach was playing host to the dippers in the north west.
We had an hour and a half to get ready for the kick-off.
And the rain obviously intended to be there for it too.

Everyone pitched in (well, we were putting up tents!) and gradually the wet car park changed from cluttered, crowded chaos to cheerful, co-operative camaraderie and suddenly, hey presto, despite the wet - we had a tent full of craft from Beltra Market, a tent for some ladies selling cookery books, a kitchen tent for Eithne from Source in Sligo who was supplying most of the breakfast, and a cheery gazebo!
Time for another flapjack in the rain...

The dippy dippers started to arrive around 8am and the Zumba dancers set up their music on the beach. (At this point I should say there were some male dippers, who had a private end of the beach, but it was primarily a female event.) There was a lot chat and laughter, and it was immediately obvious that pink was the new black - pink was hot: a plethora of pink boas and even pinker wigs, lots of polka-dot dressing gowns, some pretty amazing, half glimpsed body art, and even bunny ears, fairy wings and pink Indian headdresses. And lots of umbrellas! 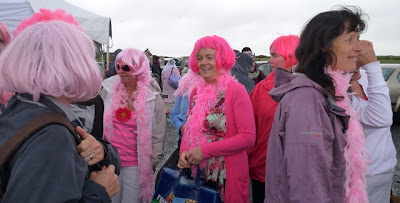 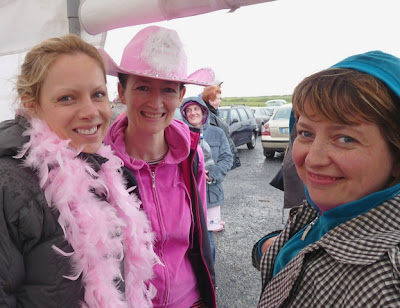 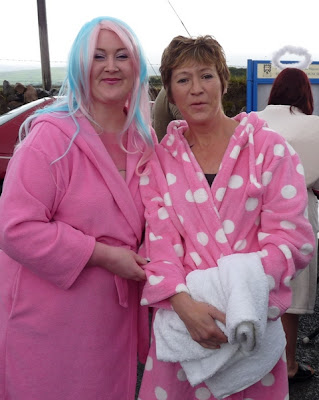 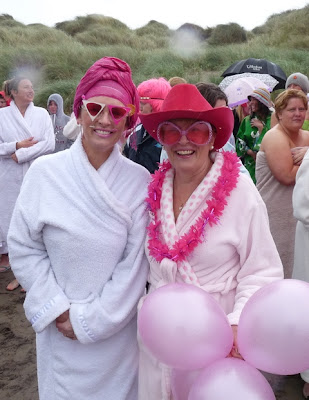 I think it was at this point I realised that the weather was SO keen to join it, it couldn't wait for the actual Dip  - it just had to soak everyone as soon as possible.

Registration complete and the prayer trees planted, people started to make their way to the cheery red gazebos on the beach for a spot of warm-up Zumba dancing with Alex and Frantiska. Then the Queen of the Dippers, Maire herself, got everyone to line up on the sand, turn round to face the ocean and started the exhilarating, terrifying, inexorable count down.
10 - 9 - 8 - and suddenly with screams and yells and shouts and laughter, countless dressing gowns and towels hit the sand and a mass of naked women dashed for the ocean, arms waving, wigs bobbing, hair streaming, warm flesh braced for the chilly plunge.
It was a rare and wonderful sight to behold, and I felt privileged to witness it.
Even the rain stopped to watch.

Later we dished out hot sausages in baps, cups of steaming tea and more Beltra Market flapjacks, and anyone who wanted to wrote a message to leave on one of the prayer trees. I left several there myself, including one for my grandmother who I never knew - she died of cancer when my mother was a child, and another for my mother-in-law of whom I was very fond, who also died too young.
I paused, as many people did, to think of friends fighting the disease, and read some of the other messages that had been left.
They were touching, sad and heartfelt.
But the morning, while full of inward thoughts and emotions, wasn't sad.

Watching everyone standing around the tents in the sudden sunshine, I was struck by what a wonderful atmosphere there was. So much positive energy, so much laughter and friendship. Each and every person was there in memory of someone lost, in support of someone suffering, in thankfulness for recovery, in protest against a disease we struggle to control, and to raise money to conquer it. But they were also there in fellowship and unity - a sisterhood of like-minded women seeking to bring something positive out of loss and pain.
What a marvellous thing the human spirit is.
Indomitable when we stand buff together - in the buff or otherwise.

Posted by Lorely Forrester at 00:12