Half Blue, Half Violet 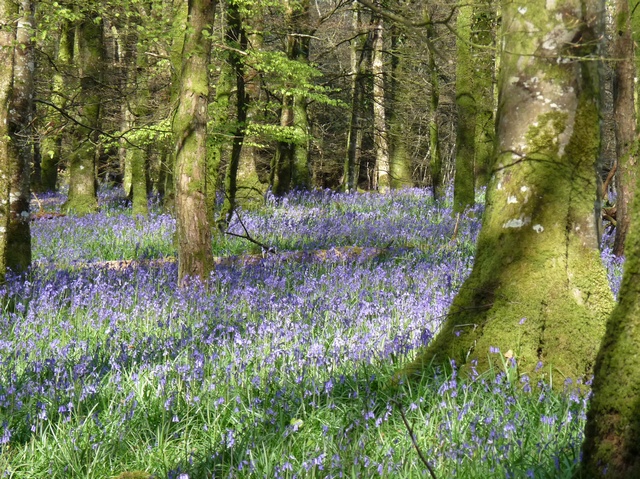 When I was very young, my grandfather took me on an outing.
It is one of the prized memories of my childhood.
I didn't see a great deal of my grandfather, because he lived in England and we lived in a variety of other places - all far away - but on this particular occasion we were in Cornwall, which was not his home, but was where his wife, my grandmother had been born and brought up. I suppose we were visiting relatives when my 'outing' took place.

Together we walked up through the small, typically Cornish village to the railway station, and took the train over the viaduct. Then we walked down through the woods on the far side of the valley and someone rowed us back across the river in their boat. At least, that's what I recall.

I suppose every part of the trip was intrinsically memorable, because there weren't trains, or viaducts or rowing boats in my other life, and I was a very impressionable child. But those aren't the bits I remember.
It was the woods that transformed that outing into something so magical, they still call me back today.

We didn't have woods where I lived either, we had tropical rain forests.
We certainly didn't have bluebells.
And I'm sure that while the whole trip was beyond exciting, it was for the bluebells my grandfather took me there.

To a small child, a sea of bluebells is a life-changing experience. They are astonishing, and other-worldly, and intoxicating. It's not just the intensity of colour, or the waist-deep sea that immerses you as surely as water closing over your head, it's also the scent.


You can tell an English bluebell (Hyacinthoides non-scripta) quite easily from the Spanish variety which is, apparently taking over in some areas of Britain and Ireland. Apart from the occasional white one, they are always blue, they have slender stems that arch, they have creamy-white stamens and they are scented. The Spanish ones are blue or pink or white, are sturdier, with thicker stems that don't arch; they don't have white stamens and they don't smell.

There is nothing to compare with the scent of bluebells. It is a delicate perfume that is never overpowering, as the delightful but much stronger lily-of-the-valley can be. It teases rather than flaunts itself, and it is very hard to emulate. The only bluebell soap I have ever had that actually smelt of bluebells was a box my mother once gave me, which came from Harrods. I don't know if they still make it, but it would be worth being on their mailing list if they do, as I can think of no nicer present. I put the three, heart-shaped bars in my linen cupboard to scent my pillowcases, and rationed them so they would last as long as possible. Fortunately the In-Charge didn't mind using the Imperial Leather instead.

They say it is smell that lodges so deeply in the memory that you can never prise it out.
I believe them.
One whiff of bluebells and I am a child again, waist high in magic, my soul back on the potter's wheel being shaped - again - around that day so long ago.
But colour does funny things to me as well. My mother used to quote a line about the colour of bluebells -  '...no man has ever named it yet, that shade half blue, half violet...'
It is probably my favourite colour, and everything about it is encapsulated in another line I once read: - 'blue that is a lovely hurting in the eyes'.

Yesterday, on a sudden impulse, I dropped everything I was supposed to be doing, threw the divine duo into the back of the faithful little green car (the silver beast being still an in-patient) and drove to a bluebell wood that I have known of for years, but never visited. It's a long way away, and after ten minutes or so there was muttering on the back seat.
'We usually walk to our woods,' Under Dog said.
'Don't worry,' Top Dog soothed. 'This is the way to our favourite beach.'
Fifteen minutes later, it started again.
'She's missed the turn off. She's lost,' Under Dog said miserably.
'They're always getting lost. Look at the Master - he doesn't find his way home 'til supper time most days. At least we're here to find the way back.' Top Dog reassured him.

Forty minutes into the journey, they curled up on the back seat in silence, which was quite a statement, as they usually like to drive.At least, Top Dog drives, head thrust forward, gimlet-eyed, his attention only wavering if we pass another dog.
Under Dog, it has to be confessed, drives by looking out of the back window to check where we've been.

They cheered up when we arrived.
It had been a long drive, but we all thought it was worth it. The flowers weren't fully out, but it didn't matter.
They raced off between the trees and I raced back in time on a helter-skelter rollercoaster through all the bluebell woods that are part of who I am.


I was a small child in Cornwall again; an adolescent in the beech woods near our eventual English home; a lover with her swain; a young mother taking her small son to be bewitched. It is always the same.That blue against the acid green of young leaves and I can scarcely breathe. When something pierces you through and through, you always catch your breath - our deepest memories, they say, are held in our breath.


As we meandered along the paths through the wood, I thought again of my grandfather, and the gift he had given me. A gift from his own experience, a gift he would have received again in the giving.

Now I realize what a two-edged sword it must have been, because now I understand the perpetual cycle of memory. That happiness and grief are inseparable.
I can only imagine what was in my grandfather's heart the day he took me on that outing. He must have been looking back, just as I was doing now, at the endlessly turning circle that somehow weaves an individual picture for each of us. He had walked those woods with his lover, the wife she came to be, and then with his small twin daughters, long before he bequeathed bluebells to me.

I suppose he felt happiness for my joy and grief for his own sorrow.
For the love of his life, the woman who had first taken him to those woods, died when my mother was only twelve.

There are no better words than those of Kahlil Gibran: 'When you are joyous, look deep into your heart and you shall find it is only that which has given you sorrow that is giving you joy. And when you are sorrowful, look again in  your heart, and  you shall see that in truth you are weeping for that which has been your delight.'

If a bluebell wood can make you smile and make you cry, then truly it is the sum of all things. 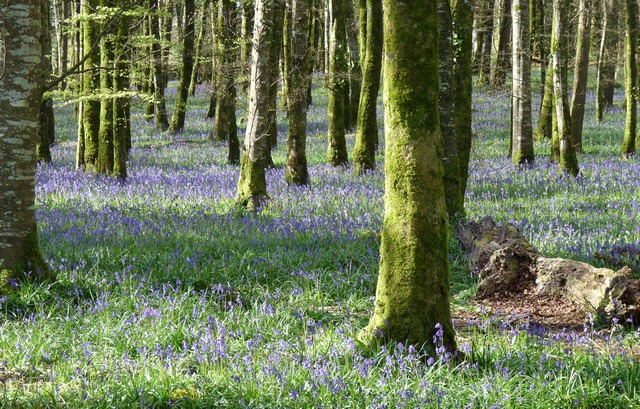 Posted by Lorely Forrester at 17:33